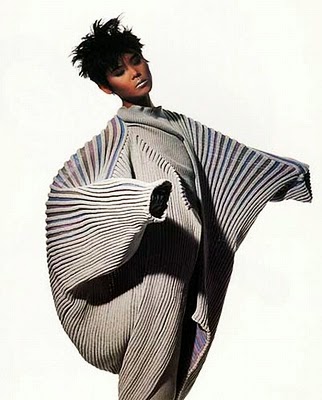 Since the late twentieth century to today, flowing fashion has accelerated significantly, and in this fluxus designers find a field of work and experimentation, which can reach uncharted land for traditional fashion. Since 1970, the work of Japanese fashion designers have had a considerable impact on international clothing, bypassing the numerous inclusions "japonismos" who came to fashion in the second half of the nineteenth century and are perpetuated to this day. These Japanese worked in a wave of renewal that was initiated by Issey Miyake. They gave a new definition of what was then creativity, status and sexuality.

Miyake consider the most revered designer in Japan today. He knew how to apply the newborn in the plastic to the textile arts, and launched a deconstruction of the parameters with which they worked in the West postmodernism.
For Miyake the matter, quite simply, is what matters.

In the matter rest "authentic" forms of tissue, away from classical forms reproduced by sewing, seeking to enhance the typified human body. In opposition to this kind of fashion, Miyake seeks powers of tissues that are docked to the human figure.

Miyake wants to return to this first experiment where the fashion design moves away from the sculptural constructions that mimic the body.

The kimono, traditional garment for him, is a union of rectangles of cloth out of the body is flat. Moreover, these kimonos are not built by size and shapes, for their adaptation to carrier requires that it take the active role, not the garment, which is just a cover for nudity.
After graduating as a fashion designer continued his studies at the prestigious Ecole Chamber Association of Parisian couture. This training was useful, and in 1966 got his first job in the fashion world with Guy Laroche; two years later was seen working at Givenchy. After that, Miyake launched in 1969 a stage in New York, where he worked with Geoffrey Beene, a year before opening his own design studio, in Tokyo.

Miyake used everything he learned in Paris and New York to create their own sense of textile design, focusing on the technological aspect of this with the help of Makiko Minagawa, an engineer - artist who explores the possibilities of fabrics.

His works of this first stage, even with all the emphasis on technology, use the traditional Japanese fashion sense: the fabric is used to wrap and separates the human body and the formation of the garment. This space between the body and the kimono in Japan is known as “ma” and, unlike what one might think, provides great freedom of movement and a perfect harmony with a moving body, which is free of the garment.

His most famous designs: the pleats at the 80’s.
Miyake no doubt occasions void the attention to detail with visible stitches, when present, incomplete seams, edges without cuffs, ropes, knots, hanging threads ... As a defender of a conceptual aesthetic, included in their shows and photo shoots with models atypical beauties.

Reveals the influence of Japanese “sabi” and “wabi” aesthetic categories that represent the beauty of incomplete, poor and imperfect.

Create a collection called " Pleats Please" where the pleats here stand as item summit and center of the collection, and career, are inspired by the famous dress Delphos Spanish designer Fortuny, who, in the early twentieth century, turn inspired the sculptures of ancient Greece. The central difference between Fortuny Delphos and Miyake Pleats Please is that while the first was created to follow the female form, the second is, rather, a foreign architectural structure.

For this collection he created a fabric that, once molded to your body, no need to iron, it has memory and thanks to this, once freed from its package is ready to wear. Later, the pleats will add wrinkles, a novelty melting sometimes with pleats creating texture and volume parts that construct the entire shape of the part of the garment.

Dress takes on a totally alien to traditional dynamics, revealing the body as moving, building a completely new, surprising and sophisticated abstract rhythm.

Along with Pleats Please, the large collection of Miyake 's A- POC (A Piece of Cloth), where a tubular fabric created from which the customer can make different pieces by cutting the fabric, in collaboration with engineer Dai Fujiwara . This would be similar to a self of some modern industries process: it is the client who builds, with the help of guides, the pledge he wants. This avoids collection of the pattern, with, again, the fabric and its internal structure which define the quality of the garments. With this concept the technology is used not as a homogenizing force or depersonalized, but as an aid to highlight the unique and assets of each client.

Miyake said “A piece of flat material become a three-dimensional structure (3D). The structure in turn, becomes a two dimensional shape with the addition of straight folding lines (2D). When the new shape is put on the human body, it becomes clothing (5D). The project name is derived from this process of transformation. It was born from the Miyake Design Studio´s continuous search for new ways by which to industrialize recycling, based upon experience with polyester fibre, New PET (polyethylene terephthalate) material is born from the old, recycling both limited resources and energy and returning CO2 to the Earth. This is the starting point for the future of making things.”